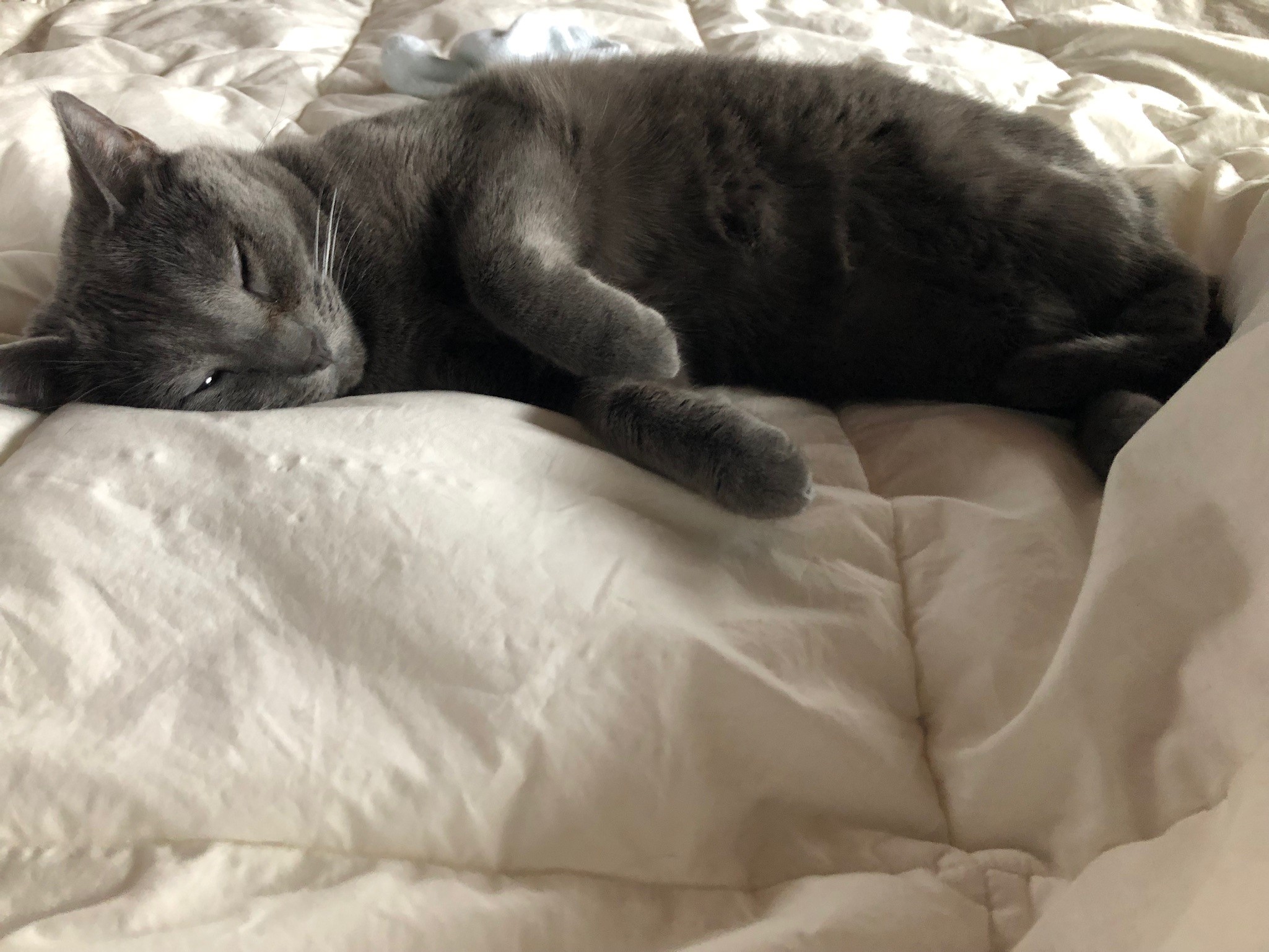 In her later years our cat Lizzy would spend every possible moment on Kristen’s lap.  One day in 2013 she developed respiratory issues and our vet recommended that we put her down.  It was another tough day of pet ownership and even though we had been through the process twice with other pets at this point, it was not (and still isn’t) easy.  Kristen was sad.

We still had a cat, Dusty, but she could NOT be petted and if she jumped onto your lap it was simply a trick to get you to put your hand where she could bite it.  With all the kids in college, and no cat to pet, Kristen was sad.

Dogs Olive and Birch enjoyed being petted, but Hamilton dogs are NOT allowed on the furniture, and they were too big to sit on your lap anyway. Kristen was sad.

I decided that Kristen’s 2013 Christmas present would be a pettable kitten.  I texted the kids who were all at Iowa State, and they were excited!  We planned to go as a group  to the Will County Humane Society on the Monday before Christmas, find the friendliest cat there, and bring it home for Mom.  We all agreed that this would be a happy surprise for the sad Mom.

The Selection
Our oldest, Aileen, had been dating the same guy in college, Chris, for over a year.  She thought that it was time to test him on a Hamilton family Christmas.  Chris grew up on a rural western Iowa farm and had always thought of cats as mangy critters that lived in the barns to control the rat population.  His introduction to the Hamilton family was to go shopping for an indoor cat.  When we told him where we were going, I think I heard him mutter, “Toto, I've a feeling we're not in Iowa anymore.”

Richard, Sean, Aileen, Chris and I all piled into the Chestnut Nissan Quest minivan.  The flower decorated Chrysler had been literally deflowered before becoming the high school vehicle and eventually being totaled due the quirkiness of the old Renwick Road one-lane bridge and one of our inexperienced teenage drivers (no injuries).  The Quest, though used, was a definite step up in bells, whistles and reliability!

We poured out of the van at the Will County Humane Society. A friendly woman greeted us at the door and led us into a room that must have had 50 cats of all colors, sizes and ages.  I immediately moved toward a massive Maine Coon that was perched on a ledge near the far corner of the room.
“You don’t want him.  He won’t use the litter box.”
I replied, “Too bad. Beautiful cat.  Do any of the others have any issues?”
“Some do, but I’m not always sure.  I’ll call and ask if I don’t know.”

I stepped out of the room to complete some adoption paperwork.
Each offspring and the friendspring were playing with a cat or two when I returned.  Sean had a kitten that was wrapped around her neck and was purring loudly.
“You don’t want him.  He has a respiratory infection.”
“What about this one?” asked Richard who was holding a blue-gray ball of fluff.
“She’s a good cat.  About four months old.”
“We’ll take her.  Does everyone agree?” I both asked and decided.
Three enthusiastic nods from the siblings and a bewildered look from the tag-along.
We had another cat.

We brought her home and Kristen was thrilled!  The kitten sniffed at Kristen, strutted away, but soon jumped onto my chest and we both fell asleep.

Kristen wanted to give her a Christmas name and after several rejected attempts she chose “Ivy.”  Chris preferred “Crusty”, the name he still calls her today. Initially, Crusty-Ivy was more my cat than Kristen’s, but now she is both of ours.  However, contrary to the reason for her adoption, she will seldom voluntarily sit on your lap and be petted.  Dusty however, now regularly sits on Kristen’s lap and snuggles-up to her in bed.  I can neither touch nor look at Dusty, but she has finally become Kristen’s constant companion.  I think she has realized that she can be replaced.

The Minnesota Cat Hunt, Part Two
In March I wrote about Dusty and her aversion to being captured and put in the car for family vacations.  Ivy is a fast learner, so she quickly became adept at hiding as well – but not as ferociously as Dusty.  Whereas Dusty will bite, yowl and scratch; the worst Ivy will do is flick her tail, squirm, and purr – unless she really doesn’t want to be held, then she will pee on you.  We have to wrap Dusty in a towel to contain her claws and fangs.  We have to wrap Ivy in a towel to contain her urine.  I prefer the scratches – they heal faster than the cat pee odor dissipates!   If Ivy “gets” you before a trip you stink for at least a day, even if you change clothes.

There was one trip when she must have sprayed the shins of my jeans during a 4am cat wrangling while getting ready to leave for Minnesota.  Once in the car I thought my coffee smelled funny, but I soon became nose-deaf to it.  About two hours later I realized that the odor wasn’t my coffee, it was me!   We stopped in Madison, WI for a gas and bathroom break.  When I stepped into the gas-station-gross men’s restroom, two hefty truckers who were shaving at the sink looked up, sniffed the air, quickly washed their faces and left.  I was momentarily embarrassed, but quickly added it to my list of personal achievements.  “Truckers in a dirty truckstop men’s room think that I’m gross.”

Fish Cat
The cats get fed at 6:30 each morning along with the dogs.  It’s always a challenge selecting which agitated animal is fed first – dog West who pounces on my face with his meat paws, then runs circles around me while drooling on the floor because he is not good at math and thinks that 4:57 is almost 6:30; dog Fern who stares at me silently while exhaling her poop-eating dog breath into my open mouth;  cat Dusty who waits patiently by her empty food bowl, back tensely turned away from me, muttering silently under her fishy cat breath, “I am waiting, and you will feed me now.  Try to touch me and I will shred you into strips of bloody tinsel.  I hate you, but you will feed me;” or Ivy who hears the food jingle into her bowl and appears from nowhere, happy and purring as she celebrates the start of another wonderful day.

Sometimes I feed West first, just to stop the running and drooling – but then Fern looks sad and disappointed until it’s her turn for breakfast.

Occasionally I feed Fern first.  She’s a good dog and she shouldn’t have to wait.  That means that there will be an extra quart of West drool on the kitchen floor, and he will frantically run into a chair, or lamp or something else that will cause a noise and wake the rest of the house.

Out of fear, I usually feed Dusty first, hoping, idiotically, that she will appreciate it.  She doesn’t, it’s expected, but the other animals understand.

Ivy almost always begins her meal in fourth place, purring loudly as she inhales the little chunks of Science Diet (half  Hairball Control, half Indoor Cat).  When she has sated herself, she stands erect, stretches, turns, and skillfully hops onto the floor from her perch on the “cat counter.”  She struts around the corner of the kitchen, tail held high with just the tip flipping right and left.  As she saunters into and across the entry foyer, she looks over her shoulder to make sure that I am watching.  She stops at the top of the stairs, tail flitting.  She places one foot down onto the top step and glances over her shoulder again.  My job now is to catch her.

Ivy is an independent cat, so she must make it difficult for me.  She keeps just out of reach, but eventually I grab the tip of her tail and pull her in for the hug and cuddle.  She nestles into my arm and begins to purr loudly.  We continue down the stairs (unless she got all the way down before I caught her) and we approach the 125-gallon African Cichlid aquarium.  Most of the fish are twice her age and she gets excited and chatters as they compete for the flakes of food that I sprinkle onto the water.

We continue into the next room and feed the Angel Fish and Tetras in the 20-gallon bowfront aquarium.  This is less exciting for her since she can jump up onto the brick hearth where this water feature rests any time she wants, but it’s still fun for her as the fish grab their food bites.

On special days when it’s not raining or cold, I’ll take her outside with me to feed the Koi.  We often call her Adventure Cat, because she likes to walk around the top of the kitchen cabinets, look out the clear-story windows and chatter at the squirrels.  She also tries to sneak outdoors and look for critters under the deck.  However, we don’t want her to become a coyote snack, so she never gets to go outside unattended.  As soon as I slide open the patio door to the Koi Pond she starts to squirm.  It’s exciting to see the fish that are big as her, and she knows that if I get distracted, she might get a chance at escape.  Escape is seldom, but it occurs often enough that her visits to the Pond are few.

We love our cats, and we are regularly tempted to add to our family.  But we won’t!  Four animals are usually too many, and any more than that could be considered crazy-person territory.  Since I am currently 8 weeks without a haircut, and I haven’t shaved in 4 ½ weeks I am approaching the woodland hermit appearance to which I  aspire.  Cover me with even more shedded animal fur, and surround me with even more beasts, and I might frighten the endless parade of socially distant walkers that seem to be ever-present on the street in our front yard these days.

Stay healthy, stay happy, stay furry, stay socially distant.  But if you’re walking on the street in front of my house, please step to the side when I try to drive past you!

Have a great day!