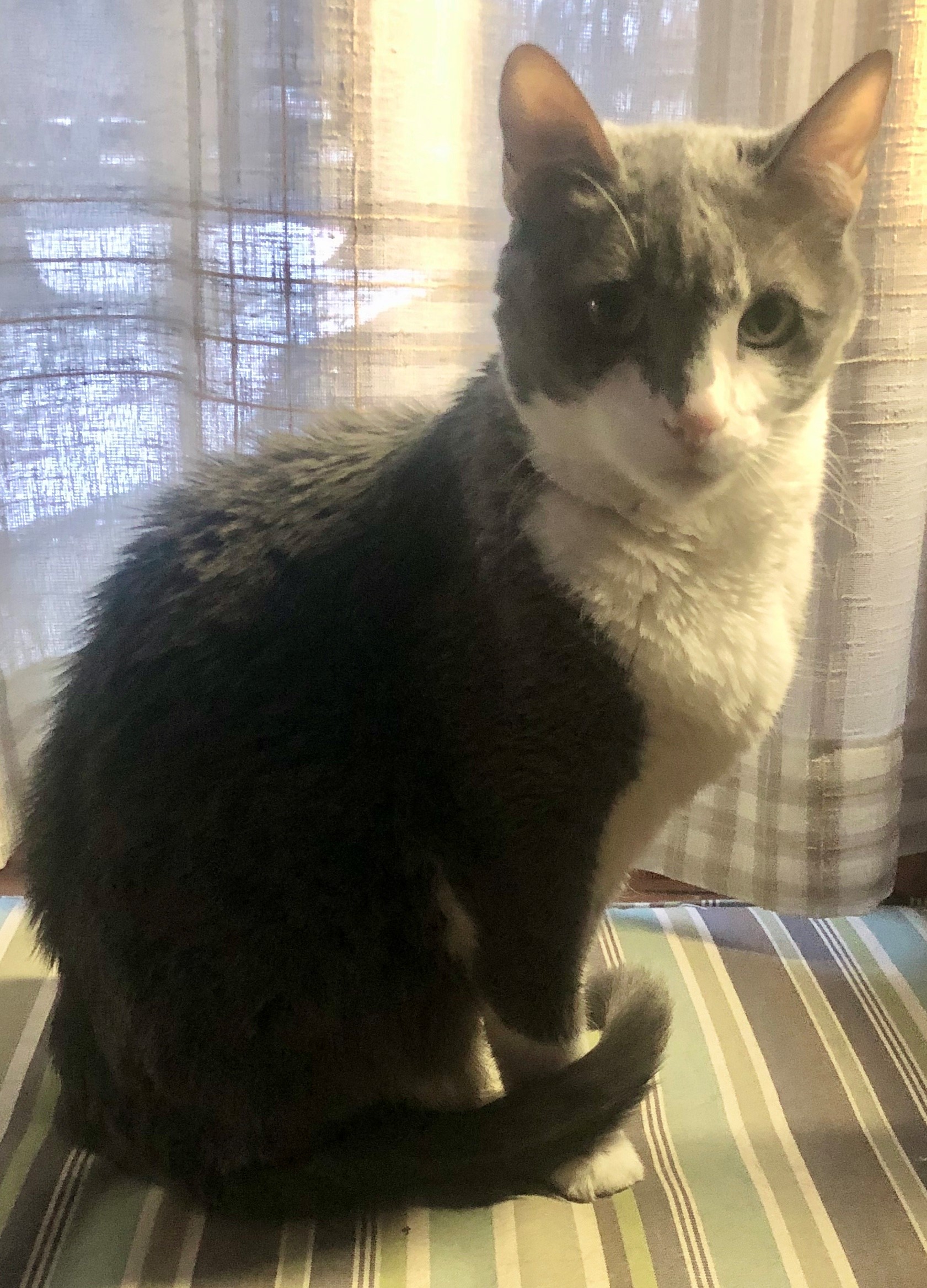 I picked up the phone.  It was my sister Helen, “Flash (their Golden Retriever) found a kitten in the wood pile, and brought it to the front door.  Brian (my brother-in-law) is allergic and wants it out of the house.  If you take it, I’ll drive down and meet you halfway.”  She lives in Glen Ellyn.
After asking Kristen, I responded, “I’ll meet you at the Bob Evans in Bolingbrook.”

I pulled the Flower Van into the parking lot at Bob Evans and saw that Helen and her kids were already there.  She emerged from her car as I stepped out of our hippie van and she gave me a hug.  She reached back in the car and retrieved a purring dusty gray and white kitten that she gently placed into my cradling arms.  The ball of fluff rolled on its side, locked eyes with me, stopped purring and bit my left hand.  I tightened my grip, turned and opened my driver’s door, flung the beast onto the seat, and shut the door with a BANG!  “Thanks.”
“No, thank you.  Brian was sneezing like crazy, but the kids were falling in love.   Mitchel (her younger son) named her Sparkles – at least we think she’s a girl.”
We exchanged a few more pleasantries, and parted ways.

Southbound on I-55 the van seemed very sluggish and after I had just passed the exit onto Illinois 126 it began to coast toward a stop.  As I began to merge onto the shoulder, I heard a “thunk” under the hood and had power again.  I accelerated to about 90 mph hoping to get enough speed to make it 3 ½ miles to the Route 30 exit. I crested the last hill before the exit ramp and the power was gone again.  I entered the Rte. 30 ramp at 40 mph and coasted to a stop on the left shoulder just before the stoplight at Plainfield Road.  I called home and asked Kristen to call a tow truck and come get me.  I uttered a phrase that I would find myself repeating many times during the 9 or 10 years that we had that car, “Damned Chrysler!”

When Kristen arrived, in my car (probably one of the Oldsmobiles, but I’ve lost track) I began searching for the latest addition to our family.  I finally found her under the back seat behind the jumper cables.  I crawled into the van and squeezed behind the middle seats.  I reached under the rear seat with my right hand and was immediately greeted with a hiss, a YEEOOWLLL!, a shredding scratch, and a hard bite.  Now my right hand matched my left hand.

Kristen looked at me unsympathetically, “You said that we could handle another cat.”

Once home, the kids immediately fell in love with our new addition.  Aileen suggested that we name her Dusty, in honor of Dusty Baker who was going to take the Cubs to the World Series (almost) and because she was a dusty gray.  All agreed.  We now had a second cat.  A few introductory squabbles with our dogs Echo and Birch and our cat Lizzy and they all became friends.  We were one big happy family, two parents, three kids, two dogs, two cats, five aquariums, one koi pond, and one salamander.  I can’t remember if we still had Princess the parakeet then, but I’m pretty sure that we didn’t have S’More the min-lop rabbit yet.  Kristen and I were badly out-numbered.

We found-out the next afternoon that the transmission of the Flower Van was toast, but covered under warranty.  HOWEVER, there were about $500 of CRITICAL wear items that needed to be repaired to avoid voiding our warranty coverage which, several repairs later, they found a way out of anyway.  First and last Chrysler.

The Minnesota Cat Hunt
The drive to our cabin in Minnesota is between 9 hours (me alone) and 14 ½ hours (when two of three kids were in diapers) – but the biggest challenge is cats!  Lizzy would get car sick on EVERY trip, sometimes before we had pulled out of the driveway, again after everyone began napping, and then usually about an hour from the cabin.  The kids used to request oxygen masks in order to prepare for these events.  “In case of cat decompression, a mask should drop from the ceiling.  Put yours on first before you vomit, then assist other passengers.”

However, as irritating as Lizzy the purring-puke-producer was, it is nothing compared to having to find a hiding cat.  Dusty has her own mind, so she does not let herself be petted, held, moved or consequently be found.  She hides in locations where she can offer the best defense – usually under a bed.  She did this when we first adopted her, and the battle continues 14 ½ years later.  Age has NOT mellowed her.

Kristen and I have tried multiple ways to trick her into being caught, but she knows that if we’re packing the car, eventually we are going to try to catch her.  So she hides.  Seldom in the same place that she did the previous time.

Here’s the drill.
1. Catch the cats first, dogs next.
2. Kristen and I each get a towel.
3. Kristen and I silently prowl around the house looking for Dusty.  We stealthily peer under beds, under the pool and  ping pong tables, and in closets.  If one of us finds her in a bedroom we close the door and call the other cat hunter.  At least 60% of the time the hiding place is under a bed, so the following steps are associated with that location.
4. Remove anything from under the bed that is not a cat.
5. Get a broom.
6. Kristen gets on one side of the bed, I on the other.
7. One of us pushes the cat with the broom toward the other who has his/her hands wrapped in a towel.
8. When the hissing, biting, scratching cat can be reached, wrap her in the towel and pull her from under the bed.  Make sure that fangs and claws are securely wrapped in the towel.
9. She usually goes limp if the towel is wrapped tight enough, and she is immediately carried to the car.
10. Cat and towel are deposited into the car. DO NOT open the towel, or you may be scratched and/or bitten, and/or the cat may escape.
11. Go back for the next cat.  Lizzy was happy to be caught so that she could go puke in the car.  Current cat Ivy (next month) has her own challenges.

Getting Dusty out of the car is equally dangerous.

Feed Me, but Don’t Touch Me!
Dusty has NEVER allowed me to pet her but she expects me to do two things for her:
1. Feed her WHENEVER she thinks it is time to be fed.
2. Lie perfectly still at night so that she can lie across my shins or between my legs.

Let’s start with number 1.  Several years ago, I lectured Dusty that people allow cats to live with them for companionship.  That means that I should be allowed to hold her and pet her, and she should react by purring and ideally coming when called.  In exchange, I would feed her at 6:30 each morning, when I get home from work in the evening, and any other time that she asks.  As an example, I offered our other cat, Lizzy, who would let me pet her at least 50% of the time that I asked.
Dusty stared blankly through me.

On a business trip I watched a few episodes of Jackson Galaxy’s “My Cat from Hell”  in my hotel room (we don’t have cable at home).  Jackson showed that you approach a cat slowly from the front, gently place your closed hand under the cat’s nose and allow her to sniff the back of your hand.  Once she has finished sniffing, she will let you pet her.  When I got home, I placed my hand under Dusty’s nose.  She sniffed, looked at me, then slowly walked away.

A few days later I tried again.  This time I was able to gently place my hand softly on her head.  She pulled away in disgust, then walked away.

I tried again on another day.  This time, as she pulled away in disgust then hissed and tried to bite me.  Jackson hasn’t met Dusty.

Issue 2…
After my work accident 30 years ago I quit sleeping through the night along with a long list of other difficulties.  There was a three-day stretch after I was released from the hospital during which I did not even close my eyes for a minute.  It hasn’t been like that since then, but more than three or four hours of sleep remains a rarity for me.

I can list off a dozen reasons for this impairment, and four dozen remedies that haven’t worked, but the way too often cause is what I call “Cat Leg.”  We have had three cats that have been causers of Cat Leg, but Dusty is the most consistent, especially in the winter.  In the middle of the night Dusty will cat-sneak into our room and float onto the bed.  Sometimes she will sniff Kristen’s and my faces first, but often she goes for the prize immediately, my shins, or on a colder night the space between my calves.  The pressure of a cat on mangled shins is not immediately painful or even  noticeable, but it builds-up slowly to become agonizing.

At some point Dusty’s invasion of my personal leg space pulls me out elusive REM sleep, and I will move my legs.  The punishment for disturbing the cat is a bite through the covers and into my Achilles.   When she is between my calves, and often as an additional agony from having her on my shins, the 101.5 degree cat will make me start to sweat.  The answer?  If it’s after 3 am, go downstairs, answer emails and/or write a blog.  Start the coffee pot at 5:30, feed the animals at 6:30, watch the news, get ready for work.
BTW at 4:00 each morning WGN plays the National Anthem performed by solo artists from Belmont University.  It’s a great start to the day, I just wish that I was watching at 7:00 instead of 4:00.

Before 3 am I still go downstairs and try to fall asleep to an old western movie.  I usually doze-off at about 6:30, just in time for the dogs to notify me that it’s breakfast time.  Kristen and I recently acknowledged to ourselves that kids and pets do two very important things for you – remind you that the details of life can’t be controlled and that life isn’t perfect.  It may not seem like it, but we enjoy the imperfections – they give me something to write about.

Have a wonderful, imperfect day!