The story of our non-musical dog Birch. 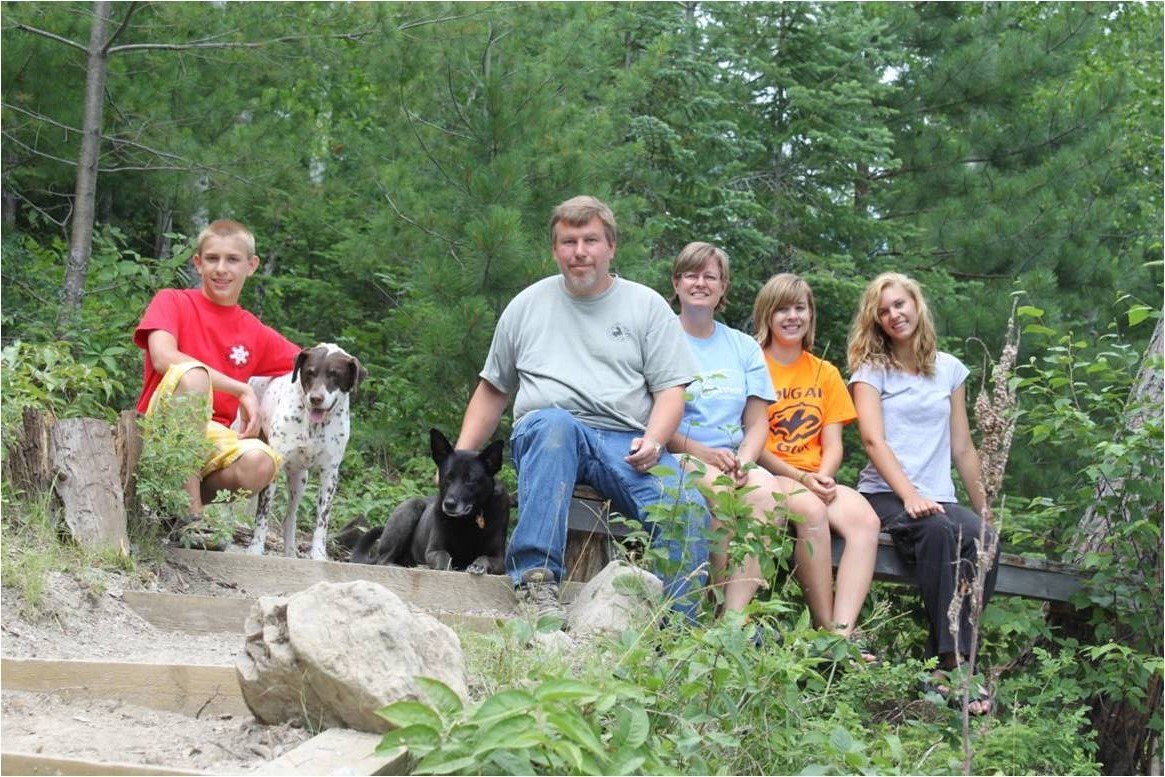 The Hamilton’s on the path to the dock on Moose Lake in Ely, Minnesota (~2011)
From left to right: Richard, Birch, Olive, some bearded fat guy, Kristen, Sean, Aileen (this is the desktop pic on my office and home computers)

“Plainfield Animal Care Center (PACC) has dogs available for adoption,” Kristen offered on Friday before I left for work.  “We could go tomorrow morning.”

“Sounds good,” I replied.  I had met the owner of PACC, Dr. Tony Kremer, several times as his Plainfield clinic was being designed and permitted.  I  was the Plainfield Village Engineer at that time.  His property abutted the floodplain of the DuPage River and I had to nudge his engineer and architect about how to ensure that the property met all floodplain regulations and would stay dry during the regular spring floods.  I liked the young Dr. Kremer (we’re about the same age), and he later became locally famous as the visiting veterinarian on a couple of the Chicago morning television news shows.

It had also been a week since the four-hour rent-a-puppy incident with Birch #1, so we were all ready to try again.

Saturday morning was a downpour with thunder and lightning, but we bundled-up the whole Hamilton crew in the minivan and floated through puddles about 15 minutes north on Rte. 59 to the Plainfield Animal Care Center.  As we pulled into the clinic, I was pleased to see that the parking lot was dry.  Most people wouldn’t notice, but they would complain if there was a problem.  That’s the frustrating thing about my job- you get complaints, but praise is extremely rare.

In our rain coats with Kristen and  me carrying umbrellas, the five of us huddled together and shuffled as a mass to the door as thousands of screeching cats and barking dogs fell onto and around us (we were outside a veterinarian’s office, and it was raining cats and dogs – yes, that was an attempt at a joke).  Inside, the clinic was bright and clean.  A smiling receptionist greeted us from behind a long counter.

“What can I do for you on this stormy morning?” she inquired.
“Do you have any puppies?” Aileen asked.
“Ours died,” Sean added.
“We sure do,” was the sympathetic reply.

We were led to a hallway with a glass window that let us see into a brightly lit room that had four or five short-haired, spotted puppies playing in it. “I think they’re Dalmatians,” the receptionist stated.  I was doubtful.  When I was young, we had neighbors that had Dalmatians and these looked different, but it wasn’t important – they were cute and active.  We played with them and selected a female that seemed to like all of us.  Her coat was mottled like the birch trees in our front yard, so named her Birch (why let a good name go to waste?).

A young vet checked her over, vaccinated, and microchipped her.  We thanked him, paid the receptionist and I walked our new pup on a leash to the front door of the clinic.  As I opened the door a bolt of lightning exploded in the dark sky with a loud CRASH!  Birch collapsed to the ground and shivered uncontrollably.  I handed my umbrella to Aileen and scooped our quivering canine into my arms.  I ran to the van a full 50 feet (it seemed like a full 50 miles!) and by the time I got the sliding side door open both Birch and I were soaked.  I set our panicked pooch on the floor of the van and she squirmed under Sean’s seat.  Sean got in and Birch pressed against her feet and shivered all of the ride home.

Once home, Echo (Belgian Sheepdog) came to greet us and immediately nuzzled our new family member.  Lizzy (cat) watched from the couch, but they soon became friends as well.  We later identified Birch as a pure-bred mutt, but mostly German Shorthaired Pointer, probably mixed with a Labrador Retriever.  From that day forward she was TERRIFIED of loud sounds.

Minnesota
By July of the next year,  Birch was about a year old.  We were never sure of her actual birthday, but it was probably June or July, so we chose July 4.  We soon learned that was NEVER a day that Birch would choose to celebrate due to the constant booming of fireworks which left her quivering under anything that she could (almost) fit under.

This July 4 we were at our family summer home in Ely, Minnesota.  As dusk approached, we packed the van with the kids, closed the sliding glass patio door but left the windows open and the fans on.  We had learned that patio screen doors were no match to large dogs that wanted to chase squirrels and chipmunks – but it was hot, so we left the windows wide open so that dogs Echo and Birch and cat Lizzy would be comfortable in our absence.

Our fireworks viewing spot is in the Catholic church parking lot at the corner of 3rd Ave. and Camp St. across from Zup’s food store near the center of Ely.  The City of Ely launches the fireworks from a barge on Miner’s Lake and the jackpines east of the church frame the display beautifully.  Ely is my favorite spot in the whole world, and St. Anthony’s parking lot is our family’s favorite spot to celebrate the birth of our nation.  This Fourth was no exception.  Kristen had packed snacks and we gorged on chocolate chip cookies,  popcorn and lemonade as the sky lit-up above us.

After the show we piled into the van, drove the 25 minutes back to the cabin and pulled onto our grassy parking spot under the white pines.  I hadn’t quite made it to the front steps of the kitchen before Kristen returned to the door and exclaimed, “Birch isn’t here!”   A hasty inspection reveled that one of the screens in the downstairs bedroom was crumpled and laying in shreds on the back deck.  Birch must have jumped out the window!  We hadn’t seen her on the drive in, and there is only one road, so where could she be?  We tried calling for her, but quickly realized that the effort was futile… “Wait!” I blurted.  “She has a name tag on her collar.  I’ll check our answering machine at home!”  I called home and listened to the messages.  Birch was at Canadian Border Outfitters (CBO) on the other side of the bay from the cabin – ¼  mile by water or ¾ mile by dirt road.  Birch couldn’t swim, but she chose the right roads to get her to probably the only place that could take her in.  We all piled back into the van and drove around the lake.

The owner of CBO, Mrs. Beaumont (the daughter-in-law of the actor that played Ward Cleaver, Beaver’s Dad, on Leave It to Beaver) met us at the side porch of CBO’s Little Store in the Woods.  “Hi Howard.  Birch scratched on the front door and was whining.  I let her in, and she ran into my back office and hid under the desk.  She hasn’t moved for over an hour!  We can’t get her out and she is trembling uncontrollably.  Poor girl.  Some of the boys were launching fireworks from a towboat in the bay.  I think it scared her.”

“That would do it,  thank you for your trouble,” I replied.

It took two of us with a strong leash to drag Birch to the van.  From that day on, whenever there was a thunderstorm or fireworks she wore a pink, tight fitting thunder jacket that seemed to calm her.  A dozen years later she wore it for her final trip to the veterinarian’s office.

The Musical Accompanist
I took my first piano lesson when I was five, switched to trumpet a year later and still play the horn today.  Each of our kids also started on piano around the age of five, then played additional instruments in school.  Aileen played piano, clarinet and saxophone.  Sean played trumpet (like her dad) and had a stint with the guitar.  Richard played French Horn, Melophone and had a stint with electric bass.  In our house we have a piano, a trombone, two bugles, a horse race bugle (three feet long), a conch shell horn, an eastern European clay pipe, a chanter (the musical part of a bag pipe), a Hindi flute, three cornets, three trumpets, a guira, a coco pod tambora, two guitars, an electric guitar, an electric bass, two clarinets, two saxophones, a baritone, a euphonium, a didgeridoo and tapping sticks, a French horn, harmonicas, miscellaneous whistles – and if you’re a Hamilton you whistle (Sean, Richard), and/or sing and make up songs fairly constantly (all of us).  Birch didn’t seem to like music.  Wrong house.

I am easily worst offender of constant signing.  In addition, as a lifelong Andy Griffith Show fan, I have every episode memorized.  One of those episodes was The Song Festers from 1964.  Barney, Andy and Gomer (Jim Nabors) were members of the Mayberry Community Choir, and the choir had entered a song fest competition. Barney had a solo in the song Santa Lucia and he belted it out HORRIBLY.  In the end, Andy gives Barney a dead mic, and Gomer sings beautifully into a live mic from behind a curtain.  The Mayberry Choir wins the competition.

For whatever reason I decided that I would scream Santa Lucia in my best Barny Fife impersonation as I trimmed my beard in front of the bathroom mirror one morning.  Birch HOWLED in agony to the amusement of the entire family.  This then became an almost daily occurrence. Over the years I would occasionally add to my repertoire, but I would always come back to my pup’s least favorite “SANNNTUHHHHH LOOOCHEEE-UHHHH!! SANTUHHH LOOOCHEEE-UH-UHHHH! SANNTUHH LOOOCHEE-EE-UHHHH, SANNTUHH LOOOCHEE-EE-UHHHH...” accompanied by the sorrowful howls of our pained pooch.

Birch would patiently listen to the piano, but every other instrument was accompanied with similar agonized barks and whimpers.  Good times.  I miss them…

I guess this ends any potential for a political career.  Dog torturer.