Waters of the United States (Update)

Since 2015, or perhaps a couple years prior, there has been a push (somewhat successful I might add) to redefine “waters of the U.S., as it relates to the Clean Water Act (Section 404), specifically wetland regulation and permitting, the National Pollutant Discharge Elimination System (Section 402, NPDES), and Water Quality/TMDL standards.   This redefined term has resulted in more physical land being subject to the EPA and ACOE rules and regulations that was once not, thus forcing more State and Federal permitting and oversight.   For instance, the new definition incorporated isolated wetland areas within the 100-yr floodplain and areas within roadside ditches (manmade).  The agencies believe that these areas followed the guidance they received from prior court rulings, in that they answered the “significant nexus” standard, as well as the standard that “only waters with a relatively permanent flow” can be regulated.  Keep in mind, this “significant nexus” and …” relatively permanent flow” needs to be to a navigable waterway.  The new definition faced quick opposition.

As a result of litigation over the 2015 Rule, the 2015 rule currently applies in 22 states, the District of Columbia, and the U.S. Territories.  The remaining States follow the original rule. 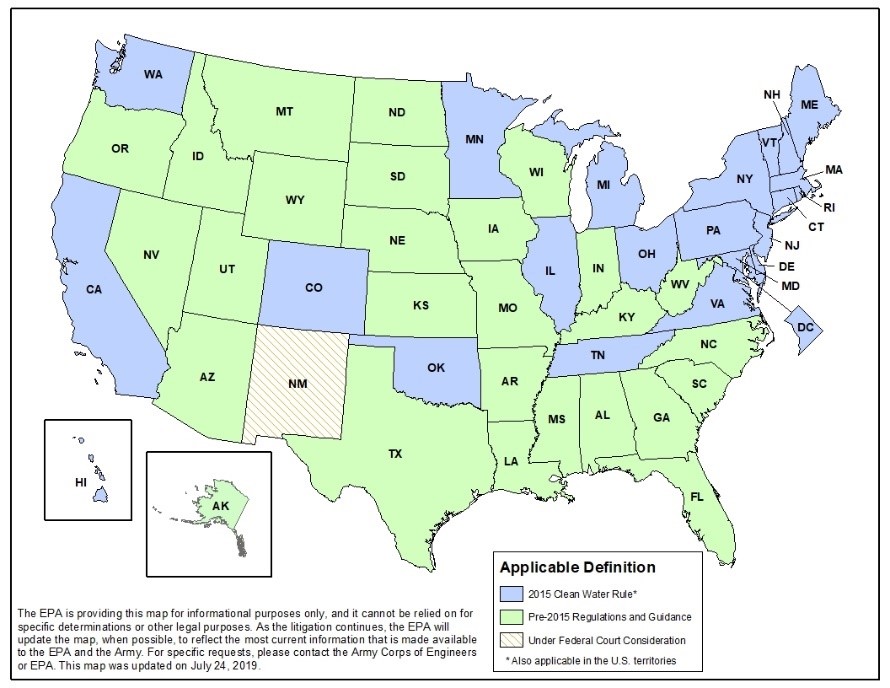 In March of 2017 both the EPA and ACOE announced that they would be reviewing the new rule with the intention of proposing rule changes (consistent with Presidential Executive Order 82 FR 12532).  In the meantime, the original rule will be re-codified to bring “longstanding regulatory framework that is more familiar to and better-understood by the agencies, states, tribes, local governments, regulated entities, and the public while the agencies consider public comments on the proposed revised definition of “waters of the United States.”

On October 22, 2019, the agencies published a final rule to repeal the 2015 Rule defining “waters of the United States” and re-codify the regulatory text that existed prior to 2015 Rule. The agencies are repealing the 2015 Rule for four primary reasons.

This final rule (re-codifying the original) will become effective on December 23, 2019.  Stay tuned for “Step Two” when EPA and ACOE attempt to modifying their definition to “waters of the United States”.