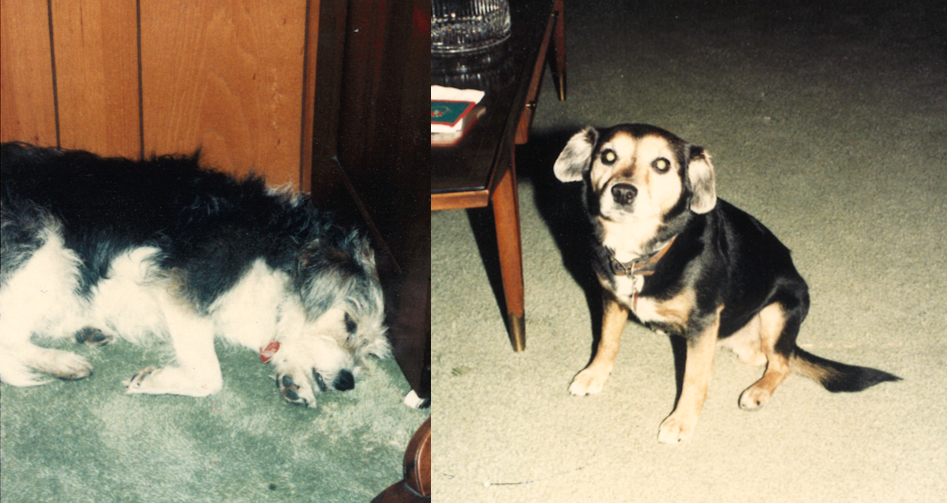 As I started “numbering” our pets, I wasn’t sure where Pretty and Candy fit in.  They were dog numbers 1&2, 2&3 AND 3&4.  When I started writing this series, I decided that the story worked best if I numbered them 3&4, after Ely and Echo, so that’s the way it’s going to be.  Here’s the story. In 1970-ish when my brother Bruce and his wife Marsha lived in Savoy or Urbana (not sure which apartment was first), they got a dog.  A 30-pound, black and white “beagle” (in retrospect she was probably a terrier-mix, but Bruce always called her a beagle).  Her name was “Stinky.”  They soon added a son Robbie to the family, moved to Joliet, rented a house on Cochrane Ave. and daughter Tricia was born.  With two young-uns to watch, Stinky would take advantage of occasionally inattentive parents.  She would enjoy trashcan snacks and forays into the neighborhood more often than she probably should have.  One Saturday afternoon Bruce opened the back door and found Stinky having “relations” with what he described as “the ugliest, mangiest, animal I have EVER seen.  I’m not even sure it was dog.  It could have been a large snub-nosed rat crossed with a dirty mop.”  For future reference I will call it “Mop.”  Not long after that, Stinky had a litter.  Robbie and Tricia named the puppies, and the ones I can remember were:

Mom and Dad said we could have one when they were weaned.  We ended-up with two.  Pretty Puppy and Runt Puppy.  My sister Helen renamed “Runt” to “Candy.”  As they grew, Pretty became less and less “pretty” and morphed into a black and white 20-pound version of “Mop.”  Candy became the spitting image of soft-haired Stinky, but a little smaller with more tan and less white than her mother.  We used to say, “Candy is pretty, and Pretty is sweet.”

Helen and I were pre-teens at the time, and we were given the responsibility of training the pups.  Consequently, they were very poorly trained.  I’ll let my mom tell the story from an entry in her journal:

Howard and Helen have two dogs- Candy and Pretty… …We have two because the children found it difficult to choose AND because their father offered the opinion that two would probably be easier to raise than one.  To offer another opinion, I say that – after my experiences- his opinion could have not been based on experience, nor even any research on the subject.  IT HAS BEEN A MESS! AND EXPENSIVE! and, somehow, I am the one that always becomes involved.

“Helen, have you fed the dogs?” Usually the answer to that is, “No.  It’s Howard’s turn!” and then Howard pipes-up with, “I fed them last time.”

I need to interject here.  In the 1960’s and 70’s the doors of the homes in our neighborhood would open at dawn and children and their pets would spill-out into the yards, streets, and woods.  The largest stretch of woods was “the Slough”, a small lake that is a widening of Rock Run Creek.  It was surrounded by huge oaks, crabapples and trails on the east side and a cattle pasture on the west side.  Not important to this story, just a point of remembrance.

The pets would return home when it suited them, and the kids would come back for lunch, then again for dinner and then finally for bedtime. In the first 15 years of my life I put more miles on my Keds and bicycle than I have run, walked, or biked in the 42 years since.

The woods around our “House in the Woods” are FILLED with burr plants.  For you city-dwellers, a burr is a green 1/8” diameter round seed that is covered with microscopic barbed hooks.  When you brush against a burr plant, dozens of those green seeds stick to and cover your socks, shoelaces, pants and shirt – and it takes hours to pull them off one at a time.  Smooth-coated Candy would run through the burrs and emerge from the woods still clean and shiny.  Pretty, due to her shaggy hair, and basic nature, would emerge caked with burrs, and mud, and smelling like whatever species of excrement or dead animal that she had felt like rolling in that day.  Neighbors would refer to her as “the Hamilton’s green dog” and caution, “don’t pet her, she stinks.”  Not that you’d want to pet her with all those prickly burrs.

One morning the doorbell rang, and Dad answered.  A young wife, a new neighbor from a couple blocks away, stood at the threshold holding our green dog.  “I found your dog wandering in our yard.  She looks like she was lost for weeks.  She was starving, so we fed her about 2 pounds of roast beef.”  Dad smiled, called Pretty inside, and said “thank you.”  He looked at his watch.  He had let her out about 45 minutes earlier.  After the roast beef feast, Pretty ran straight to that house every morning.

If you’re a regular reader (or a neighbor), you know that the woods around our home are inhabited by hordes of wild critters.  If your dog runs loose in the woods, then rolls in and eats the poop from skunks, raccoons, deer, coyotes, groundhogs, gophers, fox squirrels, gray squirrels, ground squirrels, beavers, ducks, geese, turkeys, foxes, muskrats, chipmunks, moles, voles, mice, shrews, opossums, minks, weasels, cats and other dogs, the dog will get worms.  Our half-wild, untrained dogs were treated at the vet for worms every winter. That is the background to Mom’s reference to “being wormed” that you’ll read shortly. Back to Mom:

All the above is to give background to a sad, but true, and in retrospect, funny experience.  Really, it’s only funny because we always seem to laugh at small tragedies.

It was Friday!  And a busy one.  I’d worked at the office all day and had left early enough to grocery shop before taking Howard to his 5:00 trumpet lesson.  At 4:30 I’m merrily on my way home, with the back seat loaded when, at Republic Ave., I remember that the dogs were at the Vet’s being wormed and should be ready – so I detour.

Fifteen minutes later I am again heading west on Jefferson St.- with the back seat loaded – this time with the groceries and two dogs.  Traffic was heavy and slow and I’m in a hurry – and then I smell it – Candy, or Pretty has had an accident.  The odor is so penetrating I think I might vomit.

How ridiculous! I’m 54 years old! I WILL NOT vomit!

Opening all the windows seems strange – it’s ten degrees below zero – and there is an energy shortage – but I do it and in addition I cover my nose and mouth with my gloved right hand.

I made two observations:

And I might add that the trip from Dr. Attrill’s to home takes a much longer time than I have ever been aware of!

Fast forward twelve years or so after Kristen and I had moved to Plainfield from Urbana.  Mom and Dad were starting to take long vacations, and we would babysit the ancient dogs while they were gone.  During their longest trip, to Australia in October-November 1989, Kristen and I decided that we would keep the dogs – but then I had my accident on the job site on November 20.  Kristen couldn’t be at the ICU with me and at home with the geriatric dogs, nor could my parents whom, after they returned from their trip, found themselves looking at me through the ICU glass before they had even unpacked.  So, the dogs went to my sister Helen’s apartment for a month or so, then Mom and Dad got them back.

I’m a little fuzzy, but at some point, Mom and Dad went on another trip and we took the dogs again, this time for good.  Unfortunately, Pretty ran away one night and was hit by a car on Bronk Road – I found her frozen body in a snowbank on the edge of the road about a week after she had disappeared.  I wrapped her in an old powder-blue terrycloth bathrobe that she used to curl-up in, and buried her near the can from Ely’s cremains on the bank of the river. She was deaf (at least selectively), and her eyesight was mostly gone, so it was close to her time anyway, though that was little consolation at the time.  We had Candy for another year or so before I buried her cremains next to her sister.  Here are two stories about her, unfortunately they are both a little gross, so if you’re a sensitive reader, this is a good place to stop.

Hersey’s Kisses
Candy always knew how to scrounge for snacks, but she was getting old and stiff legged.  Our much larger Belgian Sheepdog, Echo was well trained and obedient when we were home, but we would still crate her when we were away.  Hence, Kristen thought that a bowl of red, green, silver and gold wrapped Hersey Chocolate Kisses would be a nice Christmas decoration if left in the family room on a table that was too high for Candy to reach.

One December evening after work I entered the family room from the garage and noticed an empty bowl on the floor.  I puzzled, restored it to the table it was next to and continued into the kitchen.  Then I smelled it.  The entire house smelled like sour chocolate.  It was the oddest smell – both pleasantly, chocolatey sweet and disgustingly sour.  I looked down the length of the small kitchen, toward the dining table and into the front foyer.  There were flecks of red, green, silver and gold sparkles covering the gray ceramic tile floor – it was kind of festive.  Closer inspection revealed that the flecks were foil bits floating in a yellow-green, chocolate-scented gelatinous slurry of dogarhea, or arf-barf, or both.  All I know is that there was a continuous 6 to 18-inch wide stream of it across the tile from the dining table, through the entry foyer, in  a never-ending puddle along the center of the carpeted hallway and into our bedroom where Candy was laying on the plush carpet, in a far corner next to a massive pond of slime and colorful foil.  She looked toward me unapologetically with her cataract-clouded walleyed stare as if to say, “Sucks to be you.  Better clean this up before Kristen gets home.”  I could write about the frantic cleanup that followed, but it still makes me gag to remember…

Echo Snacks
Dogs, if given the chance, will eat poop.  But once our Belgian Sheepdog, Echo, got a taste of Candy poop, she treated it like candy.  Echo would follow Candy around the yard waiting for the squat, and would often barge-in before the job was done.  To see it brought on the following overlapping emotions and actions:

leading to what I called the gasp-giggle-gag reflex (reflux).  The interesting solution (from Doc Hampton) was to sprinkle Candy’s food with meat tenderizer.  Supposedly it makes the poop bitter tasting.  I’ve never tried, but I wonder who did so that they know it’s “bitter?”

Try to forget that you read this, and enjoy the rest of your day.