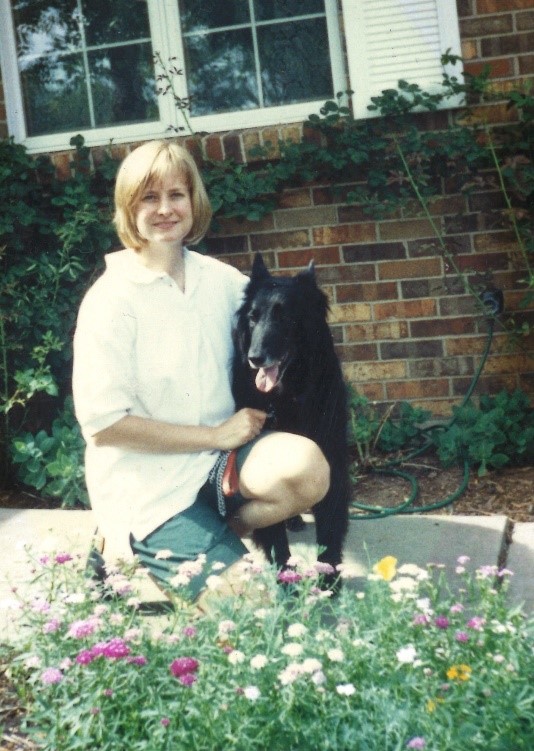 For background you may wish to re-read my May 2018 blog.

I was released from Silver Cross Hospital for Christmas in 1989. It was a coin-flip between a rehabilitation center and home nursing, but it was Christmas, so at my family’s urging the doctors agreed to let me go home for a trial.  I was in a wheelchair that I couldn’t operate very well because my broken shoulder wasn’t healed yet, and my brain was still pretty scrambled, but I suppose it was probably good to be home (I don’t remember much).

There were many things that helped me recover, and two of them were not considered typical- videogames and a new puppy.  My siblings gave me a Nintendo and as I regained my brain power I regularly rescued Princess Peach from Bowser (Mario Brothers) and became an expert at Tetris.  By late winter/early spring Kristen and I decided it was time to master something new, another puppy.  We reached-out to Ely’s breeder, but she wasn’t expecting any litters, so we found another breeder of Belgian Sheepdogs. This breeder was concerned that I may not be strong enough either mentally or physically to train a Belgian (smart, strong-willed, and strong physically), but we impressed her with our stories of training Ely, so she agreed that we could buy one of the puppy sisters from a new litter.  We named our new chubby ball of black fluff “Echo”.

One of the roads that we frequent in Ely, Minnesota is the Echo Trail, so Echo’s registered name was Echo Trail Hamilton.  The newspaper in town was the Ely Echo (run by editor and lifelong family friend Bob Cary), so it made perfect sense to follow “Ely” with “Echo”.  She was our companion and protector for 12 years.

Only a few days after we brought her home, I gave Echo one of her lifelong defining characteristics, a crooked tail.  I backed over it with my wheelchair.  The event didn’t decrease her love for me at all, but from that moment forward she tried to attack wheelchairs and walkers.  Sorry Grandma!

When Echo was 2 or 3, we introduced her to our first human addition, Aileen.  Echo’s response was, “Can’t play, won’t feed me, smells interesting…meh.”

After Aileen began crawling her opinions changed to, “Moves slow, grabs my hair, still won’t feed me, - but I do like that smell.  Generally avoid, approach from behind.”

When Aileen started eating at a high chair, the relationship changed dramatically.  “This kid can feed me much tastier morsels than what Mom and Dad give me!  Aileen is my best friend!!”

Aileen would purposely push food off her tray, onto the floor and call, “Sezza!”, which was Aileen talk for “Echo.”  Echo would immediately appear and snarf the offering.  They were inseparable from the first feeding, but it led to a problem.  When we dined out, or at friends or family’s homes, Aileen would push food onto the floor and call, “Sezza!”  It was funny the first dozen times…

“Sezza” was also Aileen’s name for Grandma and for Grandpa.  One day Kristen asked her a series of questions:

It was bleated with such screeching volume that it could have been a tape recording of my mother bellowing for Dad.  We have told that story many times leading to many laughs.  Mom never seemed to appreciate it, but Dad would quietly grin…

For her second birthday, Aunt Marsha gave Aileen a wooden sled.  Later that winter the DuPage River in our backyard froze solid, and we had a good blanket of snow.  On a frosty but sunny Saturday morning after New Year’s I went for a hike up the frozen river, pulling Aileen behind me in the sled.  Echo ran circles around us as I plodded along.  My daughter was bundled-up in multiple layers of miniature snow suits, mittens, boots and hats and she was having a great time, though she could only roll and was unable to move with all the insulation.  I pulled her through drifts, guided the sled up and down the banks and the giggles and screams of laughter buoyed me on. And on. And on.

Eventually I realized that the kid, snow suits and sled were getting harder to pull, and we were a long way from home.  “How can I make this easier for the hike home?” I pondered.

Always thinking, but seldom thinking things all the way through, I reached in the pocket of my ski coat and found Echo’s leash.  I tied one end of the leash to the pull rope on the sled and latched the other end to Echo’s collar.  She looked at me expectantly, as did Aileen.

I didn’t realize that I was about to do something really stupid.

“Mush!”
Both dog and child continued their stares and blinked at me like I was speaking gibberish.

“Home!”
Echo knew that command, and she bolted down the frozen river, sled and giggling girl close behind.  The pup soon realized that the sled was behind her, so she accelerated to try get away from it.

“Crap.”  The realization that I had just done something really stupid was beginning to set in.

Echo ran through a drift, and the puff of snow rolled my daughter out of the sled.  I reached her quickly and scooped her into my arms.

“Crap.”  The realization that I had just done something really stupid was solidified under my frost encrusted ski cap.  Echo just kept running, with the sled bouncing behind.

By the time Aileen and I caught-up with Echo and the sled, we were all on the snowy back deck of “Home” next to the sliding glass door into the kitchen.  Aileen had replaced the crying with the intense “Dad…, you are soooo stupid” stare that she (now Dr. Hamilton, DPT) still pierces me with 25 years later.  Worse yet, Kristen was standing inside, looking through the glass door with a scowl and crossed arms.

“Crap.”  The realization that I had just been caught doing something really stupid was beginning to set in.

Put the three together and you get Dad and Echo running the length of the dock at full speed, side-by-side, stride-for-stride, and diving into the lake together, swimming back to shore, and doing it again to the cheers and giggles of the entire family.  Good times.

Put the three together and you get Echo running back and forth along the shore whenever a boat was out, until she would jump in and try to swim to the boat – no matter how far away the boat was.

That’s what the Hamilton’s call a vacation!

Ricky looks at the disasters that we regularly bring onto ourselves from the pets we have chosen to share our lives with and says, “This is why we can’t have nice things.”

I hate it when the kids are right.