Ask an Engineer Why and How, Installment 7: What are Water Tanks for? 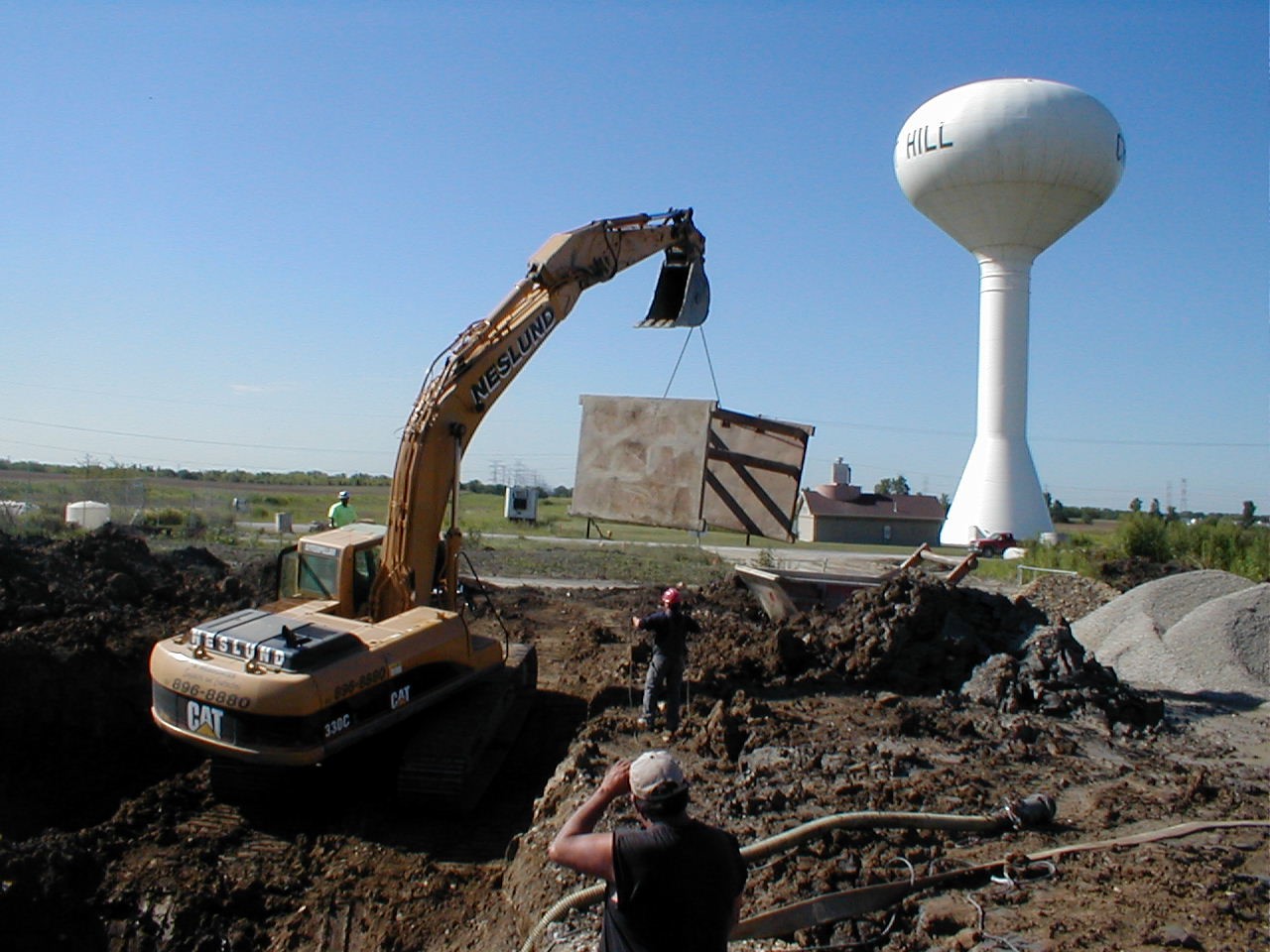 I find that I have struggled with each of the topics of the “Why” series simply because I’m an engineer and, as a non-engineer client recently told me, “Engineers think ‘differently’”.  I need to know how EVERYTHING works so, consequently, I see an infinite number of details in EVERYTHING.  Ordering and prioritizing those details as part of a design has become easy and routine with experience.  However, sorting through those details to provide simple stories about engineering topics has proven challenging (I have much less experience as an author).   Consequently, I’m going back to my Woods series next month until I have more Ask questions come in.

Each of the Ask an Engineer topics that I have written about have been hard for me to simplify and find the balance of being:

So far there have been three questions that I’ve had to answer offline simply because I couldn’t answer them in a way that met these self-imposed criteria.

There have been small “failures” in each topic:

Wastewater Treatment (Installments 2-4) was seen by some as “gross,” and it took me three installments to give a way too generalized understanding of the topic.

Floodplains (Installment 5) was confusing to some because probability analysis, even when over-simplified, is not second-nature to everyone and can STILL be confusing after simplification.

In Roadways (Installment 6) I gave in to my general nature and used physics, geometry, free body diagrams and mathematical equations to explain a few of the concepts.  Too many readers had PTSD flashbacks to high school math and science classes.

This month’s topic wasn’t easy either.  Because we are blessed to live in a developed part of the world, every one of us did at least one of the following before you read this blog today: turned-on a faucet, flushed a toilet, took a shower, washed the dishes, did the laundry, watered the lawn…  When you needed water, it was there, and you didn’t give it a second thought.  But I did, because its my job.

So, my question to you is, “Why does your shower have enough water pressure to rinse the shampoo out of your hair?”

There are many “correct” answers, and in the following picture there are four examples of the answer that I want from you, although everything in the left side of the picture has the same name. 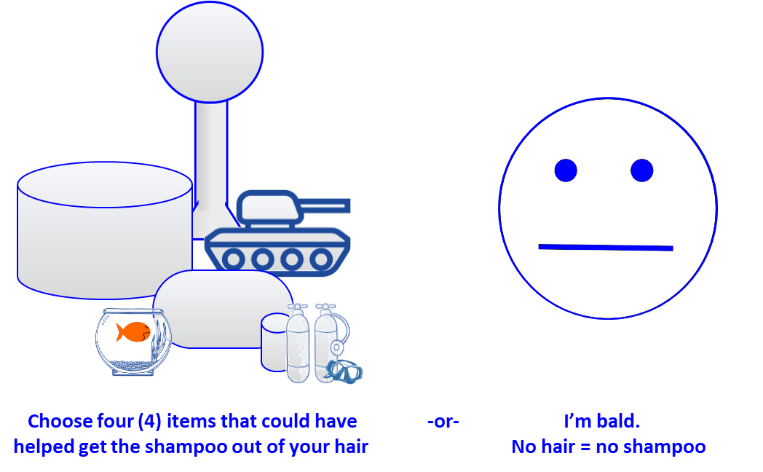 The answer is that a “tank” provided the pressure by storing the water, and the pressure, until you turned the faucet.  That is the case whether your water comes from a municipality, a water utility company, or your own well.  Here is the general flowchart of how the water made it to your shower: 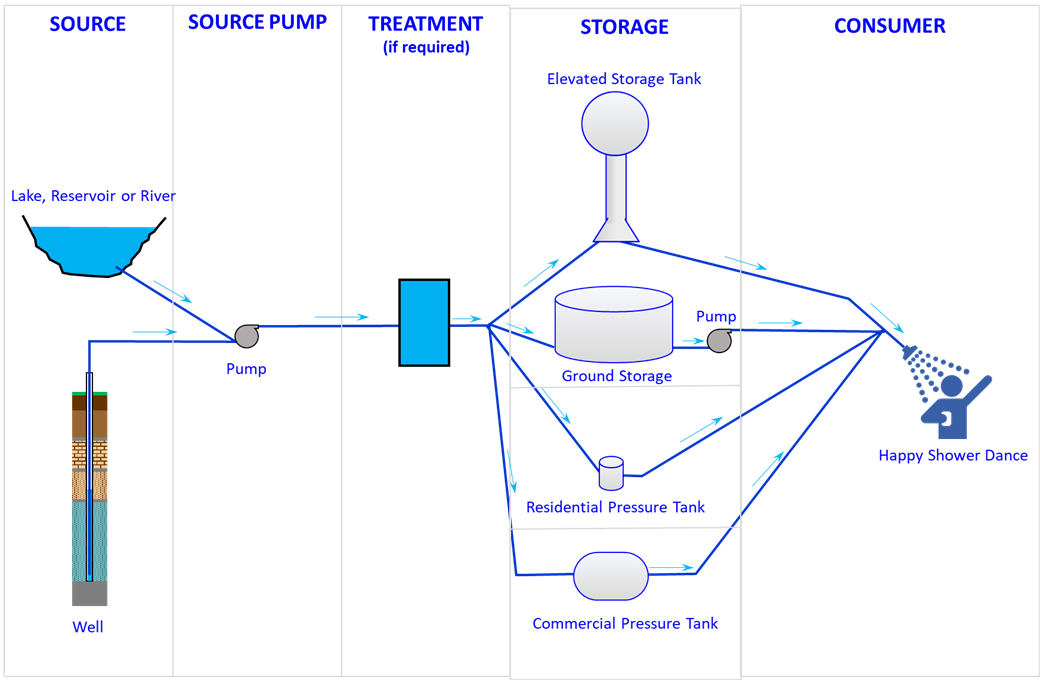 Not all water comes from the same source, but it is all pumped to some kind of tank to store both water and pressure.  Although I have worked with some reservoir systems that had dams and significant pressure without pumps, those are a rarity.  Even many of the Roman aqueducts were fed by Archimedes screw pumps – but the Romans used less pressure than we do (baths, not showers).

The minimum pressure in a public water system is 20 pounds per square inch (psi).  The concept of water pressure is not always understood, so let me give you an example.  Look at a 3-inch diameter coffee mug.  The bottom of that mug is about 7 square inches.  20 psi of pressure applied to that 7-square-inch mug would make it weigh 140 pounds (20 psi x 7 si = 140 lb)!  The equivalent height of a column of water that produced that much pressure in your cup is 46’-2 ½”.  But 20 psi is the absolute minimum for a water system.  I like high pressure showers, so I set my pressure tank to 65 psi* (we have our own well), but we normally design public water supplies to an average of about 50 psi.  At 50 psi your cup now weighs 353 pounds* and that column of water is 115’-6” tall which is, not coincidently, a typical height for the middle of many elevated water storage tanks.  However, whenever possible we will place our elevated tanks on a hill.  The tank still provides adequate pressure to the customers on lower land, but since it sits on high ground, we can build a shorter tank.

And that’s why you see those big tanks in the air and often on hills, they store water at pressure.  We have a fairly complex matrix to calculate how much volume to store at pressure and one of the major issues is insurance rating of the water service provider’s fire suppression system.  To make this really simple, one of the factors that the Insurance Services Office (ISO) evaluates is how much water can be provided to fight a fire during a power outage and/or mechanical system failure (no pumps).  The way that you operate an elevated tank is that you pump water into it at night when your water demand is low, and electricity is cheapest.  During the day, water drains out of the tank to the points of use and we size the tanks to meet that demand, AND put out a fire.   A good ISO fire rating for your water system means that you have lower homeowner/business insurance premiums.

Once again, more than you need to know, but less than I have to say…

If you have a specific question, or a topic that you would like learn about, drop me a line at Engineer@Hamilton-Consultants.com.  Include “Ask an Engineer” in your subject line.  I will respond.

* If I tried to hold that 3” diameter cup in my 65 psi shower it would weigh 455 pounds, which is why I use a small plastic shot glass for my morning shower scotch**.