An Engineer in the Woods, Installment 7: A Final Goodbye


My sister-in-law, Marsha, met me at the front door of Joliet Area Hospice, “You should tell Mom that you and Kristen plan to move into the house.”

Mom had been in Hospice for about a week and she had drifted between lucidity, blank staring, and sleep, depending upon the concentration of the morphine in her system.  During my early morning, late afternoon and evening visits she had been confined to the latter two conditions. Helen’s and Marsha’s visits of usually just before or just after me, and my sister Jan’s regular appearances had produced some enjoyable conversations of which I had not been part.  I usually just watched her sleep.

Our mother had probably begun to slip around the time of her 92nd birthday in the late spring of 2014.  It didn’t seem obvious at the time, but there was a clear line when she stopped her focus on balancing her checkbook in QuickBooks and daily updating of her spreadsheets that was very obvious after she had passed and we were reconciling her records.  By October she had begun a downward spiral that included multiple stays at Silver Cross Hospital, St. Joe’s Hospital, Alden Rehab, and about a month with full-time home health care from Thanksgiving to Christmas.  Early one morning at the beginning of March, she looked Marsha and me straight in ours eyes from her bed in St. Joe’s and said, “Why are YOU doing this to me? I’M DONE WITH THIS DAMMIT!!!”  We had already met with some Hospice providers, and Joliet Area Hospice was our choice.  Mom’s doctor was Kristen’s and my family physician, and he stepped-in.

Dr. Chauhan had become my friend and confidant over these months with Mom and he was kind and patient as he asked Mom what types of treatment she wanted, receiving multiple replies of “Nothing DAMMIT!!!”  He finally asked if she wanted to go to Hospice, “YES DAMMIT!!!!  AND I WANT A MARTINI!!!!”

“Okay.  I’ll prescribe martinis for you.  Two per day.”

She smiled, relaxed and said, “That would be nice.”

I made a few phone calls to Hospice and family members and by that afternoon Marsha and Mom took the ambulance to Joliet Area Hospice as I drove to the Liquor Depot on Jefferson St. to get martini glasses, a shaker, Beefeater’s gin, olives, ice, toothpick swords and the smallest bottle of the driest vermouth possible – I never use the vermouth, I just point the martini shaker toward the open bottle.  I have friends that don’t even open the bottle.

When Mom was all checked-in, multiple members of the family joined us.  I can no longer remember who was there on what day, but I can remember that Mom was all smiles as she gulped-down her martini and three olives and asked for another, which I gave her – doctor’s orders.  The next night was dirty martinis, also well received.  Then back to straight-up but with a twist and blue cheese olives.  The following morning the chaplain approached Marsha and informed her that drinking was not allowed in the rooms.  Marsha stated that Mom had a prescription, but the chaplain replied, “Do you and your family have prescriptions?”  That night we sneaked-in and quietly sipped margaritas.  By the fifth night Mom no longer seemed interested in happy hour… 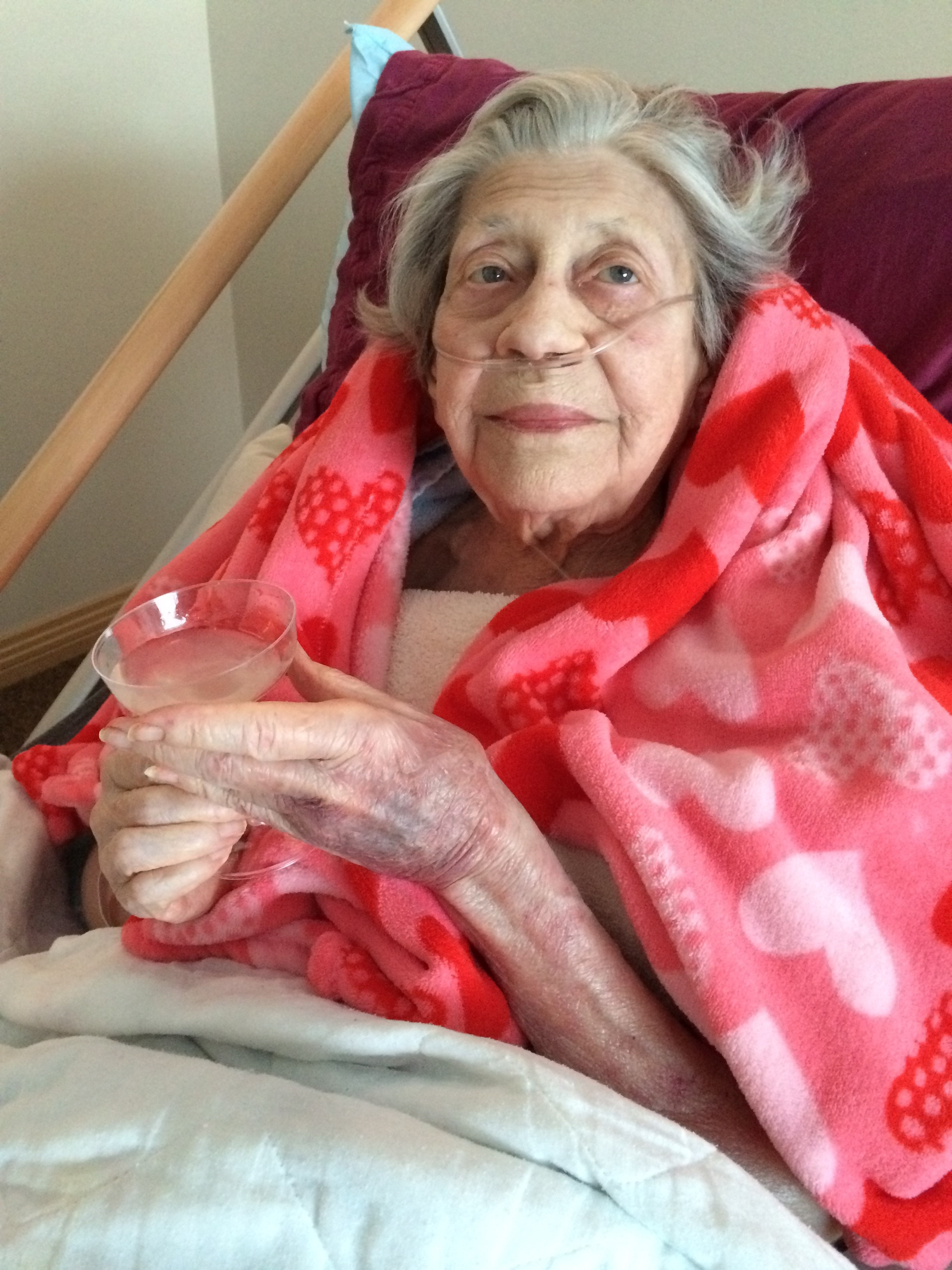 It  was a lunch-hour visit when Marsha suggested that I tell Mom about the house, “She’s having a good day and we had a nice visit.”

I approached Mom in her bed and she was sleeping.  She opened her eyes and smiled when I said, “Hi Mom.”

We stared at each other for a few moments and I offered, “Kristen and I are planning on moving into the house.”

She smiled again and fell back asleep.

A few days later she passed away peacefully in her sleep in the middle of the night.

I’m an Elder at Our Savior Lutheran Church in Joliet, so I know how to plan a funeral – but Mom didn’t want one.  Instead, the entire extended family would have a party at the house with steak, lobster, good stories and martini toasts to Mom and Dad. I had ordered 50 “8 ounce” martini glasses from Amazon.  So, I did some math:

Therefore, I needed 5 large bottles of gin with a little leftover…

Had I really thought about it I would have realized that I have never drunk an 8 oz. martini, and if I had, I probably wouldn’t remember it!  We  also had lots of parties this size and larger, and had never gone through a full bottle of gin, let alone 5 bottles! But I’m an engineer, and math is infallible so I bought 5 bottles of gin, a shot glass of vermouth, jalapeno stuffed olives, pimento stuffed olives, and I hand stuffed 75 blue cheese olives with fresh Roquefort from Marianos.  I premixed three of the bottles of gin with a splash of vermouth and put them in the freezer along with my “standby” bottles of gin.  We were ready to celebrate my parents' lives!

I have since measured the “8 oz.” martini glasses and they are just a little over 4 oz. when over-filled to the brim and dripping down the sides.  Plus, I failed to account for the volume of the olives.  I’m a 3-4 olive guy thus bringing my martini down to about 1.50 oz.  Math is infallible, engineers are not.  I still have some of the gin and at least one bottle of olives.  It was a good party though…

Cheers, and Thanks Mom and Dad!